It all began 27 years ago, at the young age of 13. I started experiencing very severe depression – the depression would come in cycles lasting two weeks. During this time I would not sleep, eat, talk or take care of myself. I basically could not function, and I just wanted to die.

My parents took me to numerous doctors, and they said what I was experiencing was typical teenage behavior. After two years of fighting these incredible lows, something new happened... My first manic episode.

I was 15 years old when I was hospitalized and diagnosed with manic depression. It was 1992, most people had not even heard of it and the doctors said I was the youngest person they'd ever diagnosed with it.

I'd always felt like I was different than everyone else and like I never fit in with anyone. Then when I was diagnosed with a mental illness, I even felt more alone. I had so many different emotions. I wanted to know, "Why me? What did I do to deserve this?" I felt so much shame and embarrassment. I felt that my teen years had been stolen from me and I was full of anger.

Luckily, I was prescribed Lithium and it helped with controlling both the depression and mania. I was able to complete high school and attend college. Then I got married and had a child.

The doctors advised me not too because I'd have to stop the Lithium. But, I was determined to have a child regardless. I got off my medications and immediately became pregnant. I was wonderful during the pregnancy. However, the two years after were terrible. Although I got right back on my Lithium after my delivery, I started experiencing depression, panic attacks and started battling anorexia. I was scared to even leave my home.

Then I experienced my first, second, and third full-blown manic episodes. I was 23 and was hospitalized three times that year. They had me on so much medication, I couldn't take care of myself or my 2-year-old daughter. I couldn't even function, I was like a zombie. It took years to recover and get back somewhat normal.

As the years went by and life had been going great, I thought bipolar was a distant memory. I thought as long as I stayed on my medications, I would never have to worry about it again. Well, 13 years later it showed its ugly face again.

I started feeling depressed and was having suicidal thoughts. Not only did the severe mania set in, but psychosis hit. Hearing voices, hallucinating and having delusions was new to me. It was the most frightening experience I've ever had. Also, I was having multiple personalities and rapid cycling. I had to be put in the ICU and put to sleep for three days. Once I woke, I had no memory of the events. I was completely fine and came home.

Two years pass, then I was dealing with some stressful events and started losing sleep. Before I knew it, I had the worst manic/psychosis episode ever. I've learned a lack of sleep and stress are my main triggers.

You are not alone ... Bipolar is very treatable, don't hesitate to ask for help. Remember the lows are only temporary and will not last forever. Things do and will get easier and better!

First off, God! If it weren't for Him, I never would have made it!

Second, my parents for taking care of me and getting me help.

Third, my husband, he had NO idea what he was signing up for. He's been great and never left my side.

Forth, my sister, since she also suffers from bipolar/psychosis, she's always been here for support and understands what I'm going through.

Fifth, my daughter for being understanding and loving me through all my many, many mood swings.

Lastly, my cat, she's given me unconditional love and she makes me so happy when I'm feeling down.

I have social anxiety, so I avoid crowds as much as possible. I enjoy staying home and staying to myself. I tend to avoid people who stress me out, and also I avoid stressful situations, if possible.

I've had to cut my hours at work if I'm feeling overwhelmed. I had to stop worrying so much about things that I can't control. I've stopped trying to do too many things at one time. I've excepted that it's okay that I can't work and keep the house spotless because my medications make me exhausted.

I do not drink alcohol and I take my medications faithfully.

Being a great mother and wife is my greatest accomplishment. Having a job and being able to work is something I will never take for granted because there were many years that I wasn't able to.

What's your advice to someone else living with bipolar disorder?

You're not alone in this. Please seek help and never give up. It's always important to tell someone in your family what you're going through or talk with a close friend.

Bipolar is very treatable, don't hesitate to ask for help. Remember the lows are only temporary and will not last forever. Things do and will get easier and better!

Stay under a psychiatrists care, take meds properly and always get enough sleep. Try to avoid to much stress, if possible.

Being a great mother and wife is my greatest accomplishment. 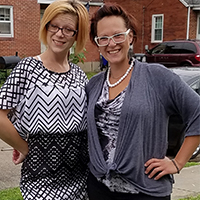